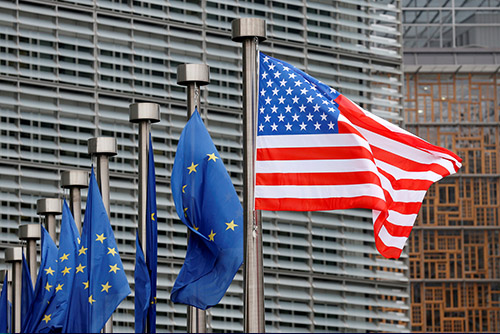 On the 21st of January 2021, world leaders welcomed the inauguration of the 46th President of the United States, Joseph Biden. The period between the election results and the inauguration was fraught with both domestic and international anticipation, suspense, and tension. On his first day in office, Biden portrayed his proactive agenda by "undoing" specific policies undertaken by his predecessor Donald Trump such as the withdrawal from The Paris Climate Agreement and withdrawal from the WHO, while signaling to international and domestic stakeholders the active role he will undertake in maintaining US leadership. Biden has pledged to implement two-important policies when it comes to Iran specifically: returning to the JCPOA agreement (albeit with stronger conditions) and addressing Iran's malign activities in the region, including its support for terrorism and missile program. However, in the Arabian Gulf, Iran has continued its destabilizing behavior and expansionist hegemonic agenda, balanced with calculated maneuvers that it will exploit at future negotiation tables.  A second major item on his foreign policy agenda, Biden aims to restore EU-US relations to their traditional state of affairs. Therefore, the scenario remains highly likely that Biden will follow the E3 school of thought on maintaining a favorable position towards Iran coupled with an unwavering commitment to avoiding the outbreak of war. The EU has completed a blocking statute following the US decision to withdraw from the JCPOA to prevent sanctions on European businesses engaged in deal-making in Iran, and set up special purpose vehicles (SPVs) capable of undertaking transactions with Iran while Saudi Arabia supported the imposition of maximum sanctions.

Biden is also likely to pressure Iran on its ongoing domestic human rights situation and the silencing of Iranian regime critics domestically through unlawful imprisonment of activists and journalists. The United Kingdom, France, and Germany are likely to support this approach, and using their chairmanship of the JCPOA, they can strengthen the pursuit of diplomatic initiatives to address broader issues with regard to Tehran. Additionally, Iran began conducting Track II efforts with the Biden administration before the president assumed office to restore confidence and build the frameworks of the US rejoining the JCPOA. The GCC summit at Al Ula restored a sense of normalcy in the Gulf region, with GCC member states establishing a framework towards a unified regional policy on Gulf security. Although the summit did not comprehensively solve the underlying disagreements among the region's countries, it achieved milestones in framing the GCC's security threats, primarily concerning Iran. A unified GCC stance towards Iran is essential to contain and combat Iranian malign activities in the region and the ability to convey collective security concerns to international, regional, and sub-regional organizations. A unified GCC will also allow for significant progress to be made in establishing a joint strategy to identify threats, which will contribute to the implementation of the Middle East Strategic Alliance. However, the dichotomy between blocking arms sales to Saudi Arabia while Iran continues to build its military and proxy capacity will further destabilize the region, increasing the likelihood of confrontation.

The Iranian recognition of Biden's attempt to “undo” Trump-era policies, has resulted in Iran pursuing a series of calculated steps based on Biden's geostrategic outlook to improve its bargaining position in future negotiations and as power projection tools to create a sense of urgency for renegotiation. Firstly, Iran has increased its uranium enrichment to 20% (essentially enough to develop a dirty bomb capable of producing catastrophic damage) in blatant violation of its commitments to the JCPOA. Secondly, Iran’s claims that it can achieve 90% enrichment if instructed to by the Ayatollah. Lastly, conducting military exercises in the Arabian Gulf is designed to showcase its weaponry. Iran has made clear its position, first lift sanctions, and second return to the negotiation table. Iran's recent activities mentioned above are aimed at causing a sense of urgency in order to force the E3 and US to succumb to Iranian demands. The GCC on the other hand, is the region that is most affected by Iranian aggressive behavior.

The weapons showcased by Iran during its military exercises the week of Biden's inauguration exhibited among its conventional weapons and its missile capabilities, the same drones used to launch the attacks on Saudi oil facilities in Abqaiq-Khurais. Furthermore, Iranian missile capabilities and the proliferation of Iranian manufactured weapons to violent non-state actors in the region, particularly in Yemen, has led to over 300 missiles launched directly at Saudi Arabia. Iranian direct and indirect support to terrorist organizations in the area has led to a plethora of cells across the Arabian Peninsula and wider Middle East, including cells within Saudi Arabia, directly threatening Saudi and GCC national security. Nevertheless, reaching an agreement on the nuclear issue is the primary concern of the EU and US; however, the real Iranian weapons of mass destruction to the GCC are, Iran’s missile program, its destabilizing maritime activities, support for terrorism, and expansionist agenda. For trilateral cooperation among the GCC, EU and US to yield fruitful results in stabilizing the region and preventing the enduring threat of conflict in the Arabian Gulf, the latter must acknowledge the very real national security concerns facing the GCC as a result of Iranian activities in the region. This policy approach from the Biden administration will require that US allies in the GCC and Israel remain informed on matters pertaining to renegotiation, thus strengthening the US position that diplomacy strengthens regional security rather than undermines it. The development of a trilateral coordinated effort between the EU, GCC and the US should encompass Iran’s nuclear program, its missile program, maritime security, Iran’s interventionism and expansionism, and Iranian support for violent non-state actors.

Nuclear program:  The nuclear issue remains at the forefront of the Arabian Gulf's security concerns and the global security landscape. The EU, GCC and US acknowledge the importance of nuclear non-proliferation, and establishing a weapons of mass destruction free zone in the Middle East region. The most recent GCC summit stressed the importance of this matter and condemned Iran on its continued failure to fulfill its obligations to the International Atomic Energy Agency (IAEA), on ceasing the implementation of its commitments, and its delay in providing the required information about its nuclear program. The E3 (France, Germany and Italy) also expressed its concerns regarding Iran's commencement of uranium enrichment up to 20% at the underground facility of the Fordow Fuel Enrichment Plant.  Iran has continued to increase its stockpiles of enriched uranium, and therefore a unified, coordinated effort among the EU, GCC and US is necessary to prevent nuclear proliferation in the region.

Missile program: The Iranian missile program continues to develop its  accuracy, range and export to non-state actors. Iran possesses the largest and most diverse missile arsenal in the Middle East, ranging from short and medium-range missiles to long ballistic and cruise missiles. Iran’s further development of ballistic missile technology contributes to regional tensions and poses a threat to international peace and security. Its rockets are increasingly accessible to violent non-state actors and continue to be launched at Saudi government and civilian sites. To prevent a regional fallout, the EU and US must continue to place the importance of continuing the ban on the export of conventional weapons to Iran and the continuation of relevant sanctions as they remain the gravest national security concern to the GCC and are central tools for Iranian power projection and intimidation.  Iran additionally trains and equips non-state actors to operate and launch missiles. For the GCC to unequivocally support the US-EU stance on Iran, GCC national security concerns must be addressed, placing the Iranian missile program at the forefront of important topics.

Maritime security:  Iran’s continuous disruption of shipping lanes and seizure of ships in the Arabian Gulf must be addressed, as these actions directly hinder naval navigation in the Gulf's waterways in violation of international law. Iranian actions targeting the safety of navigation, marine installations, energy supplies, oil pipelines, and oil installations in the Arabian Gulf and waterways threaten the global movement of trade and a key source of the global energy supply. Therefore, the EU, US and GCC's unified trilateral efforts to prevent acts that threaten the security of GCC waterways, international freedom of navigation, and undermine regional and international peace and security must work in synergy to avoid the outbreak of conflict stemming from the mismanagement of a maritime crisis. Iranian actions have been unchecked despite the presence of US B52 bombers in the region, as evidenced by Tehran's Korean vessel seizure.

Support for terrorism:  Unified efforts by the EU, GCC and US must address terrorist acts being carried out by Iran and its support of sectarian conflicts, its violations of international norms and values,  and threats to regional and global security in order to counter violent extremism and promote regional stability as a whole. The continued smuggling of Iranian weapons to Houthi militias and other violent non-state actors has led to well-armed militias capable of overthrowing governments and waging war on neighboring countries. Additionally, Iranian funding and assistance to terrorist organizations that support Tehran's ideology fuels sectarianism across the region. Iran's supply of money and weapons to fuel ideologically motivated factions in the region is an urgent national security threat to the GCC. For adequate conflict resolution, Iran's interventionist and expansionist policies must be included within the frameworks of trilateral GCC-EU-US efforts to counter Iran in Lebanon, Syria, Palestine, Yemen, Iraq, Afghanistan, and Bahrain, among others.