Back to the Ottoman future. The Framing of Turkish Foreign Policy in the Saudi Media 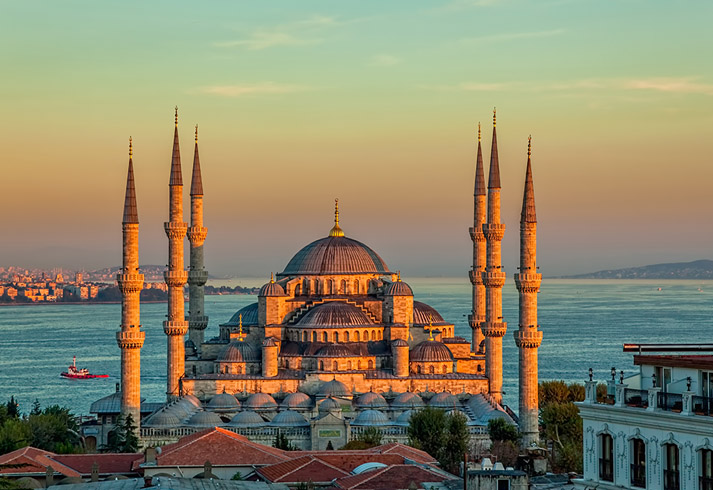 With the informal boycott of Turkish products and business ties in October 2020, Saudi-Turkish relations are taking another hit, causing economic damage in Turkey and leaving some 100,000 Turkish expats in Saudi Arabia as much as Saudi businessmen who are dependent on Turkish imports in uncertainty about their economic fate. And while Saudi-Turkish relations deteriorated ever since they found themselves on opposite sides of the fence in the post-2011 Middle East, the recent escalation brought a novel feature in Saudi public discourse, framing Turkish foreign policy as neo-Ottoman expansionism. This neo-Ottoman rhetoric serves broadly speaking two purposes. First, it allows commentators to portray Turkey, and the support for Islamist groups such as the Muslim Brotherhood, as an existential and expansionist threat, similar to portraying Iran as the ‘Safawids’, bent on a Shi’a crescent. Second, it enables the op-ed authors to boost the deep historical roots of the Saudi state far beyond the foundation of the third Saudi state in 1932, constructing both Saudi victories and suffering in relation to the Ottoman Empire in the 19th and 20th century.

One of the main demarcation lines in the post-2011 Middle East is defined by a country’s support or antagonism to Islamist groups such as the Muslim Brotherhood. Turkey’s continuous support for the groups, and Istanbul becoming a safe haven for Islamists caused anger in Riyadh and Abu Dhabi, which even contributed to a proxy-war in Libya. In the same vein, Turkey chose to stand with Qatar after the ‘Quartet’ – Saudi Arabia, the UAE, Egypt and Bahrain – imposed a blockade on Qatar in summer 2017. More recently, in July 2020, Turkey converted the Hagia Sophia from a museum into a mosque, causing tensions between Saudi Arabia and Turkey over leadership in the Islamic world. The boycott of Turkish products in Saudi Arabia that began in mid-October 2020 was framed as grassroots attempt, and while there is some evidence of this, it should be noted that the head of the Riyadh Chamber of Commerce and Industry, Ajlan Al-Ajlan mobilized for a full-fledged boycott as early as 2 October and that the major supermarket chains in the kingdom implemented the boycott soon after. This indicates at least some top-down guidance.

It is worth exploring how the deterioration of Saudi-Turkish relations has been reflected in Saudi newspaper rhetoric. Reading through articles by some of the most influential op-ed authors in the kingdom, for instance Salman Al-Dossary, Abdulrahman Al-Rashid (both Al-Sharq Al-Awsat) or Mohammed Al-Sa’ed (Okaz), a recent shift in their regional priorities is evident. In most of their articles in 2019 on geopolitics, they wrote about Iran, while only occasionally writing about Turkey. In late 2019 and particularly in 2020, however, Turkey seems to have been upgraded to become the main target of the authors. Certainly, this is not to be thought of as a 180-degree turn, rather a continuous process that began in summer 2019[1] and accelerated over the following months. While explaining this shift in detail lies beyond the scope of this article, it might have been caused by Qassim Soleimani’s assassination in January 2020.The assassination of Iran’s military mastermind might have relatively reduced the perceived threat, shifting the immediate attention away from Iran. Further, given the prominence of the Libyan war in op-eds on Turkey and Erdogan, the development of the Libyan conflict might provide an additional explanation. The timing of the discursive shift coincided with Turkey’s deployment of Syrian mercenaries to Libya in December 2019 and Turkish soldiers in January 2020, fighting against the Saudi-Emirati-supported coalition. Regardless of the exact reason(s) behind the shift in media attention towards Turkey among Saudi nationalist commentators, the shift in itself is significant and worth analyzing. Examining the content of these articles can allow for a better understanding of the purpose of the neo-Ottoman framing.

First, the neo-Ottoman rhetoric serves as a metaphor capturing the Saudi perception of regional politics. As Khalid bin Abdulaziz Aba Al-Khail argued in a December 2019 article for Okaz newspaper on “Ottoman exports” in reference to Turkey, Saudi Arabia and its allies have been inspired by ‘patriotism’ while their opponents, Turkey (‘the Ottoman Empire’), Qatar, and Iran, by ‘Islamic internationalism’. They were using military force, Islamist groups, and mercenaries to advance their expansionist project, against which the kingdom has needed to defend itself (and the entire region). The ‘alleged Caliph’ Erdogan is, in this image, a staunch supporter of the Muslim Brotherhood and Qatar, as much as he is ‘cloning the Khomeinists’, for instance by recruiting foreign mercenaries. Strategically (and ironically), the ‘new Ottoman Empire’ and the ‘Persian crescent’ are not enemies of each other. In fact, as early as February 2020, Saudi commentator Mohammed Al-Sa’ed stated in Okaz that Khomeini and Erdogan were ‘two sides of the same coin’ who attempted to divide the Arab world among their empires as Erdogan wanted to revive the Ottoman Empire. In addition to comparing Erdogan’s Turkey to Qatar and the Brotherhood and Iran, some commentators describe the Ottoman Empire as the ‘Da’esh of the 20th century’ or attest that Erdogan embraced Da’esh and other extremists in Syria. Thus, equating Turkey with all major geopolitical enemies of the kingdom highlights the high level of threat perception that seems to be prevalent among Saudi elite commentators. The neo-Ottoman rhetoric serves as a metaphor that holds these various comparisons together and that channels the anti-Muslim Brotherhood rhetoric into a good-patriotism vs. evil-‘Islamic-internationalism’ framework. Thereby, it strips the Turkish effort of any religious connotation: Turkey is expansionist, but any pretense of being leaders of the Muslims is just for imperial gain, as it was under the Ottoman Empire.

[1] See for one of the first articles developing the neo-Ottoman rhetoric: https://aawsat.com/node/1799686 (Salman Al-Dossary; 06.07.2019). The wording of this article, however, is more cautious, merely stating that ‘Erdogan’s ambition stems from the Ottoman history’, rather than implying a full-fledged neo-Ottoman revivalism.

Those articles that were published in December 2019 and January 2020 particularly focus on Libya. The Turkish intervention serves as evidence that Erdogan was determined to revive ‘Ottoman colonialism’, underscoring the perception of Turkey as a military threat. The claim that Erdogan aspired to revive the Ottoman Empire raises inevitably the questions of the status of the Holy Cities of Mecca and Medina which were part of the Ottoman Empire before the foundation of the third Saudi state. The Ottoman threat, in this context, is not immediately military but rather symbolic.

In addition to branding Turkey a public enemy, the neo-Ottoman rhetoric fulfils a second function. It creates a historical continuity of the three Saudi states by painting the Saudi state(s) and the Ottoman Empire as historical rivals. ‘Tradition’ is a source of nationalist capital that barely dries up. Thus, reconstructing the Ottoman Empire as historical enemy facilitates the establishment of Dir’iya as ancient Saudi capital and the re-construction of a Saudi national identity that reaches back three centuries. For this reason, the boycott of Turkish products is a ‘cultural break with a colonial state, [as] the memory of the Saudis is still carrying bad memories with it, and many are still circulating painful stories that their ancestors experienced. The children of three Saudi states have experienced a bloody history with terrible Turkish massacres that cannot be accepted or surpassed.’ The neo-Ottoman rhetoric allows commentators to boost the deep historical roots of the Saudi state, going far beyond 1932.

It ought to be noted, however, that Saudi public interest in the Ottoman Empire is by no means only driven by the boycott campaign. Turkish drama series have been very popular in Saudi Arabia, bolstering Turkish soft power in the kingdom. The most recent successful TV show “Resurrection: Ertugrul” is set in 13th century Anatolia and is centered around the main character, the warrior Ertugrul Gazi, father of the founder of the Ottoman Empire, Osman. Concerned about the soft power of neo-Ottoman phantasies, Saudi Arabia, the UAE, and Egypt banned the series in early 2020, coinciding with the ‘neo-Ottoman’ media campaign. Thus, the media campaign appears to be part of the home front in a soft power struggle with Turkey.

All of this leaves us with the questions, how far does the neo-Ottoman rhetoric find support beyond elite commentators and to what extent do these commentators influence public opinion? In order to explore Saudi interest in the ‘Ottoman Empire’, I looked at Google trend data going back to January 2019. While the examination of Saudi search histories is far from being a perfect proxy to answer this question, it may provide a rough idea in terms of an interest spike in the ‘Ottoman Empire’ (rather than Turkey), at all.

The results show that there was no increase corresponding to the neo-Ottoman rhetoric until the big campaign in October began. With the start of the boycott, there is a significant uptick indeed, but still not getting close to a quarter of the interest in ‘Turkey’. Further, as there is as of now only a spike in the beginning of the boycott campaign, the interest in the Ottoman Empire does not seem to be sustained.

To conclude, the neo-Ottoman rhetoric is a tool to strengthen Saudi national identity and to push back against Turkey on both the domestic and regional stage. It is utilized to brand Turkey a public enemy, to delegitimize Erdogan as the ‘alleged Caliph’ of an Islamic internationalist empire, building on the ideology, goals, and methods of the Muslim Brotherhood, Qatar, Iran, and Da’esh. Likewise, the neo-Ottoman framing becomes a source of nationalist capital, extending the historical roots of the Saudi state, reinforcing the current Saudi nation-building project. The ban of popular Turkish TV series, particular those that export neo-Ottoman phantasies, exemplifies the soft power struggle between Turkey and Saudi Arabia. The boycott of Turkish products was the most significant move so far, escalating the neo-Ottoman rhetoric into economic damage. Looking ahead, there is little reason to believe that the fundamental tensions between Saudi Arabia, her Emirati allies, and Turkey will be resolved soon. And while the popularity of TV shows and Google trend data are far from being perfect proxies, there is little evidence that the neo-Ottoman framing of Turkish foreign policy has become entrenched in Saudi society. 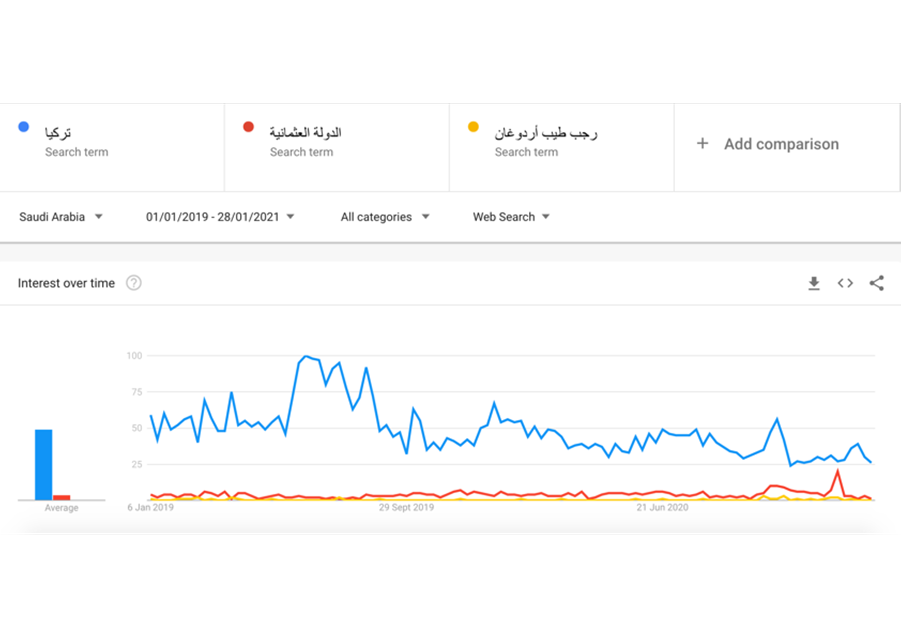 * Bruno Schmidt-Feuerheerd is a researcher with the Gulf Research Center and PhD student at the University of Cambridge. You can follow him on Twitter @BrunoFeuerheerd .