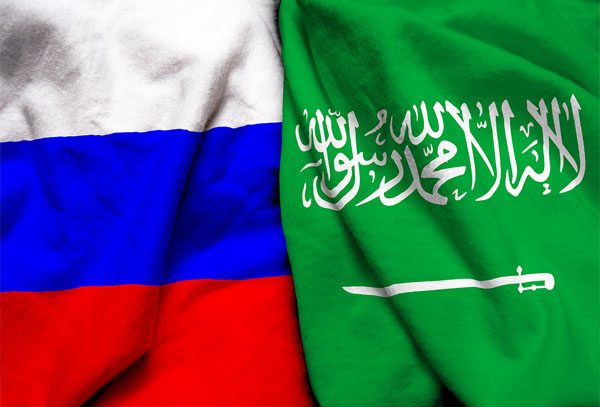 Saudi-Russian relations date back to 1932 when the former USSR became one of the first countries that formally recognized and established diplomatic relations with Saudi Arabia, and these relations have significantly evolved since the collapse of the Soviet Union. Russia and Saudi Arabia are among the top oil producers and exporters globally; therefore, harmonious relations between the two nations are in the interest of both countries and the international community. Russia's increased posturing in the region in terms of both upgrading its geopolitical standing to rival the U.S., promoting Russian arms sales, co-setting oil prices, increasing investments in Russia, promoting Russia’s security architecture, and securing key trade routes and strategic outposts in the region, requires Russia to have active institutional bilateral relations with Saudi Arabia. On the other hand, Russia perceives Iran as an essential geostrategic and political partner to cooperate with on economic and security issues to preserve Russian interests, while Saudi Arabia faces a constant threat from the Iranian regime. The perceived U.S. withdrawal from the region under the premise of the so-called pivot to Asia, championed by the Obama administration, the lack of meaningful U.S. engagement in regional affairs as well as the reluctance to engage unilaterally further in the Middle East allows Russia to both exploit U.S. weaknesses in the region as well as offer traditional U.S. allies with alternative security and economic arrangements that are favorable to Russia's strategic objectives in the region.

Moscow's interest in the Middle East can largely be attributed to four principal aims. 1) Maintain a seat at the table for critical negotiations and decisions. 2) An opportunity to strengthen its economy through trade and investment (This partly reflects Moscow's long-term interest in global oil prices, which are critical to the Russian economy.).3) To become an alternative to the U.S. as a security and economic guarantor. 4) Regional stability, in part to preserve current regimes to avoid failed states and to prevent spillover of terrorism to Russia and its neighbors.

Although Russian interests and desired future scenarios for the region's geopolitics in some cases contradict U.S. policies, a future cold war scenario between the U.S. and Russia in the region would undermine the broader regional security architecture as well as hinder economic diversification and development. Therefore, it is in Saudi Arabia's interest for the U.S. and Russia to avoid competing in the region and establish “camps” as was the case in the Cold War era. TheRussian military intervention in Syria in 2015 was a critical milestone not only in Russia’s Middle East foreign policy but also Russia’s overall foreign policy and geopolitical balance of power, as Russia orchestrated a high-profile military deployment in a region long dominated by the U.S., challenging the status quo in the Middle East.

In terms of Saudi-Russian relations more specifically, the most recent March 2021 meeting between Russian Foreign Minister Sergey Lavrov and his Saudi counterpart Foreign Minister Faisal Bin Farhan highlighted the importance of mutual consultation resolved through coordination and cooperation, highlighting mutual support and diplomatic ties between the two countries. The meeting focused on the attacks on the Kingdom’s energy sector by the Iran-backed Houthi militia in Yemen. The foreign ministers of both nations stressed the vital importance of support from the international community to preserve critical oil facilities in the region. In light of these attacks and the recent escalation in tensions across the Arab Gulf and the expired UN arms embargo on Iran that allowed Iran to purchase foreign weapons last October for the first time in decades, Saudi Arabia called upon a renewed block on weapons sales to Iran. Russia showed signs of support towards Saudi Arabia, calling the developments in Yemen “worrying.” Both sides also discussed the role of OPEC+ on global oil supplies and the Syrian conflict. While Saudi Arabia has indicated an interest in concluding large-scale defense contracts with Russia, including purchasing the S-400 air defense system, deals of such magnitude are unlikely to materialize. The nature of cooperation between the U.S. and Saudi Arabia in air force and missile defense capabilities places restraints on Moscow's ability to export missile defense systems, which has both strategic and practical implications.  On the other hand, while Saudi-Russian economic relations remain robust across cooperation on trade and energy, Saudi Arabia has traditionally favored Western markets, namely the U.S for its sovereign wealth fund’s public and private investments.

While the primary threat facing the Kingdom is Iran, Russia has valued good relations with Iran for several reasons. First and foremost, Russia sees Iran as a strong ally in opposing U.S. foreign policy. Russia is also a key player in Iran's efforts to combat U.S. aspirations in the Middle East and has broad support across Iran's political spectrum. Russia has seen Iran's economic isolation from the West as an opportunity for Russian businesses to acquire stakes in Iran's energy sector without facing competition from the West. The relationship between Iran and Russia has been strengthened by the rising tensions between Iran and U.S. that began after Donald Trump took office, and there is no doubt that Iran views Russia as one of its closest allies. Russia and Iran share the same views on various strategic issues in the region, such as shared support for Bashar Al Assad, which serves as strong motivation for Iran to expand its military partnership with Russia. On the other hand, Russia continues to place value on its strong relations with Saudi Arabia and has long sought to increase trade and investment relations with the Kingdom. In this regard, the Joint Saudi-Russian Intergovernmental Commission on Trade, Economic, Scientific, and Technical Cooperation agreed to continue work on expanding trade, economic, industrial, and investment cooperation between the two countries within the framework of bilateral cooperation formats. Russia has preferred to keep its relations with Saudi Arabia and Iran on a bilateral basis and not choose between them, for example its portrayed willingness to cooperate with both nations on arms sales. Russian petroleum firms have long been active in Iran and seek to increase their involvement in Saudi Arabia. Russian cooperation with OPEC on restraining oil outputs benefits Saudi Arabia and Iran alike. In other words, whatever Russia does for one, it is also willing to do for the other. Russia does not want the Saudi-Iranian rivalry to escalate into an open conflict that poses difficult choices for Russia that it is not ready to be confronted with.

In essence, while Saudi-Russian relations have lagged behind traditional US-Saudi cooperation, the opportunity for both Saudi Arabia and Russia to expand the scope of their partnerships remains robust. Russia’s increased assertiveness as well as efforts to offer countries in the region an alternative to Washington in the form of political and military support has worked favourably to allow Moscow a stronger foothold in the region. Saudi Arabia, on the other hand seeks to expand its economic and defence cooperation to counter current and emerging threats and to allow for adequate economic development and diversification under the premise of vision 2030. As such, it remains in both nations’ interests to preserve regional stability and prosperity, therefore allowing for reciprocal institutional relations that benefit both Moscow and Riyadh in their geopolitical and economic strategic objectives.  In conclusion, Saudi Arabia remains a crucial player in the region where Moscow seeks to expand its geo-strategic influence, and Russia remains a critical superpower capable of cooperating with Saudi Arabia to combat threats and exploit opportunities. Although divergences on certain political issues exist between Russia and Saudi Arabia, namely, on matters pertaining to Iran, the benefits of cooperation between the two nations outweigh the costs. The Saudi – Russian relations did not, and most unlikely, will not develop to the level of "strategic relations", in the foreseeable future. Saudi Arabia might be able and willing to maintain reasonably good relations with Russia, but the relations will remain constrained by a number of obstacles. Namely, Saudi – US relations and Russian– Iranian relations.