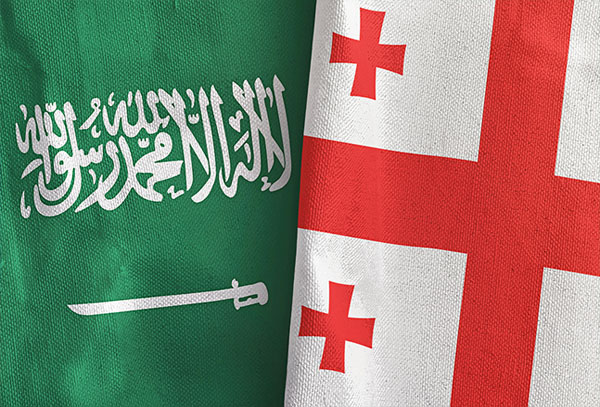 Given the territorial proximity, the regional actors of the Middle East have always been interested in Georgia and the South Caucasus as an opening route to Europe. Since the collapse of the Soviet Union brought an end to Georgia's isolation, a gradual reclamation of its historical role as a cultural and economic crossroads between the Middle East, Asia, and Europe has taken place.

Issues pertaining to bilateral cooperation and prospects for relations between Georgia and the Kingdom of Saudi Arabia will be discussed in this paper by highlighting the importance of strengthening friendly relations to enable the development of political, economic, social, and cultural ties between the two countries.

Diplomatic relations between Georgia and the Kingdom were first established in 1994, and since then, there has been a gradual growth in bilateral relations, primarily focused on the economic and tourism sectors. The opening of the Saudi embassy in Georgia was important for the development of a gradual unification of the geopolitical concerns of the South Caucasus and the Middle East, with the goal of promoting business and political opportunities between the two sides.

Georgia’s geopolitical location and the significance of the Caucasus region is of primary concern for Saudi Arabia, in terms of stability and political security in the region. Saudi Arabia should look to deepen ties with Georgia, not only through the agricultural and tourism sectors, but also by developing important oil and gas trade routes, as part of its mission to contain Iranian influences in the region. Iran remains one of the key regional powers, in part through strong economic ties with Georgia. The land corridor of the South Caucasus links Russia in the north with Turkey and Iran in the south. This has opened new dimensions for the national interests and security of Saudi Arabia, as Iran is bordered by Armenia, Azerbaijan, and Turkmenistan, further strengthening the importance of the containment of Iran in the region, given that Iran considers the region as crossroads for trade between the Mediterranean region and China as well as between the Baltic Sea area and the Arab world.

The containment of Iran has always been at the top of the priority list for the leadership of the Kingdom in the three main areas: first, nuclear proliferation - prevention of the militarisation of nuclear programs in the region through the implementation of weapons of mass destruction free zones; second, securing maritime trade routes - this is important for the majority of the Gulf countries, as well as for the countries between the Gulf of Aden and the Strait of Hormuz, as 40% of all world-traded oil passes through this channel; and third, overruling the use of sectarianism as a tool for expansionism. The Kingdom aims to cooperatively work with Iran in developing state-to-state relations, to create a peaceful and stable region; however, due to the interventionist and expansionist policies pursued by the Iranian government in the region, turmoil has increased in many areas of conflict (Libya, Iran, Iraq, Syria, and as a proxy war in Yemen).

Saudi Arabia's support of Georgia on various international issues is important. Such support includes, for example, Saudi Arabia’s recent call for a ceasefire between Armenia and Azerbaijan over the territory of Nagorno-Karabakh, which helped resolve the conflict under the relevant UN Security Council resolutions. Such cooperation reflects and helps to sustain  the international presence for both countries. During the Saudi Shura Council’s Joint Saudi-Georgia Parliamentary Friendship Committee meeting, Georgian Ambassador to the Kingdom, Vakhtang Jaoshvili, condemned the recent Houthi attacks targeting the Kingdom. He also expressed his country’s desire to provide a broad range of services to Saudi tourists to make their stay in Georgia comfortable. Developing and expanding relations with the Gulf region would help to reduce the influence of Iran on the region.

Great attention is paid to the tourism sector and the economic potential between Saudi Arabia and Georgia. The Kingdom is among the largest investors in Georgia from the Gulf, with foreign direct investments to Georgia from the Kingdom exceeding USD 100 million, mainly in real estate, agriculture, and hospitality. More and more businessmen are showing interest in visiting Georgia to seek investment opportunities. Deepening business and commercial relations with Saudi Arabia will be beneficial for Georgia in relation to further enhancement of cooperation ties with the Gulf Cooperation Council (GCC). Additional economic and business opportunities will become apparent as trade volumes between the two sides continue to steadily increase with USD 21 million in 2020, and with room for further growth.

Establishing free trade agreements between Georgia and the Gulf countries would be mutually beneficial in terms of accessing markets and facilitating increased bilateral business and trade. With considerable large trade volumes between these two regions, especially in livestock, metals, and petroleum products, free trade agreements between Georgia and this region would allow the Gulf countries to develop their position in the Black Sea trade routes.

Referring specifically to Saudi Arabia and Georgia, there are several areas of cooperation between the two countries that could be improved. Proposed cooperation in the economic sector could be enhanced by a ‘Georgia-Saudi Joint Commission on Cooperation’ to facilitate closer ties between the two countries through the expansion of investments and technology sales. Additional cooperation opportunities could be created through a ‘Saudi-Georgia Commission’ or a ‘Georgia-GCC Business Forum’, which could potentially include all six members: Saudi Arabia, United Arab Emirates, Bahrain, Kuwait, Qatar, and Oman. Such organizations could help in pinpointing areas for deeper cooperation beyond simple bilateral trade ties, and assist in identifying and prioritizing goods, services, technology, and other commercial opportunities, to deepen economic and trade relations.

Generally, Saudi citizens have not considered Georgia as one of their main tourist destinations, however, in recent years there is increased interest from the Kingdom, as more than 75,000 Saudis witnessed Georgia's hospitality in 2019, placing Saudi Arabia ahead of the other Gulf countries in terms of number of visits to Georgia. This was a 45% increase compared to the previous year. People-to-people contacts have been greatly facilitated through direct flights between the two countries and by the implementation of visa-free travel for Saudis to Georgia, with extended stay and multiple entry possibilities. This has considerably simplified and boosted tourist capacities and investment prospects between the two countries.

Progress in the field of military cooperation, with intensified seller-buyer relations between the two states is another potential area for cooperation that will continue to develop further. This could involve establishing a technical centre in Georgia to coordinate the sale of military technology and promote Saudi-Georgia programs on science and technology. The two countries could adopt a ‘Technical Cooperation Agreement’ to facilitate the implementation of technical/economic studies of specific development projects and provide technical assistance to these projects.

Saudi Arabia and Georgia seek to put their defining footprints in Asia, as both countries are focused on diversifying their economies and becoming pioneers of modernisation and reformation in the region. Both states intend to put in place a close and proactive partnership that would also strengthen cooperation between the international community and the governments of the Gulf region and Georgia, ultimately to address the globally important issues of security, peace, and sustainable development.