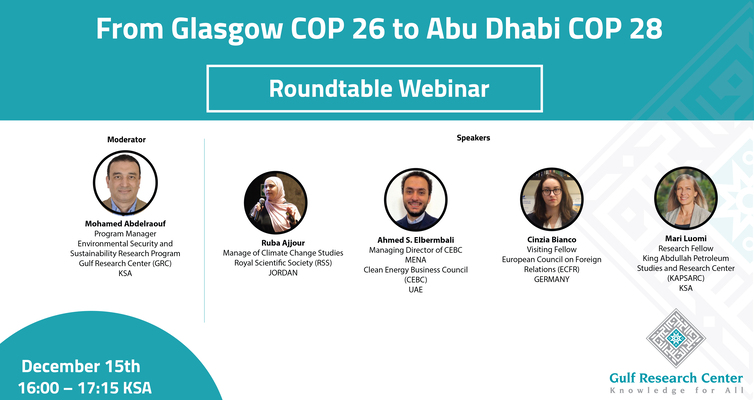 The focus on the webinar was on the main outcome of the Climate talks in Glasgow in November 2021 and its implications for the next two COP Meetings which will in fact be held in the MENA region - COP 27 in Egypt and COP 28 in the United Arab Emirates. The discussion also included the issue of energy transition given that this is a key topic for the GCC region.

The event was moderated by Dr. Mohamed Abdelraouf, Environmental Security and Sustainability Research Program Manager at the Gulf Research Center

As the first speaker, Dr. Mari Loumi, Research Fellow at the King Abdullah Petroleum Studies and Research Center (KAPSARC) in Riyadh, argued that the COP 26 was crucial for the Paris Agreement’s credibility and as such several important steps were taken. This included progress of transparency rules, on article 6 in terms of double counting and adaptation finance, as well as a agreement on a common timeframe for Nationally Determined Contributions (NDCs). For ’developing country issues’, positive steps can be cited in terms of a global goal work programme on adaptation, on financial issues such as the US $100 billion goal ’tracker’ and climate finance definition, and the establishment of a dialogue mechanism for loss and damage issues. As she mentioned, the COP 26 outcome also included many ’firsts’ for example in terms of references to coal, fossil fuel subsidies, just transition, carbon budgets, and methane.

On the Road to COP 27, countries will have to work on better adaptation communications, put forward low GHG development strategies as well as provide NDC updates in order to strengthen the 2030 targets. For the region, Dr. Loumi mentioned that it would be important to work on turning regional priorities into ambition-raising platforms especially in Adaptation, Natural endowments (clear emission roadmaps with milestones) and Science (here, a cooperation platform for regional climate scientists and researchers).

Ms. Ruba Aljour from the Royal Scientific Society in Jordan highlighted that COP26 introduced a broad, political “cover decision” – the “Glasgow Climate Pact” – calling for renewed efforts to raise ambition on cutting emissions, climate finance, adaptation and the loss and damage already being caused by warming. The pact “requests” countries to raise their ambition again next year and creates a “Glasgow Dialogue” on funding for loss and damage, as well as pledging to double adaptation finance. It was also the first-ever COP decision to explicitly target action against fossil fuels, calling for a “phasedown of unabated coal” and “phase-out” of “inefficient” fossil-fuel subsidies.

Additional positive takeaways included that countries, companies and investors announced plans to accelerate the shift away from coal power and inefficient fossil fuel subsidies, to drastically cut methane emissions, to halt and reverse forest loss, and to align private investments to net-zero. Also, COP 26 provided the platform for the US and China to finally agree to work together on limiting a rise in global temperature to 1.5°C, which could herald a crucial era of climate co-operation.

With Egypt hosting COP27 in November 2022, the perspective will shift to the Global South’s leadership role and looking more deeply into adaptation gaps. Here, she mentioned that that would be important to push the adaptation agenda forward by looking at nature-based solutions.

For the UAE and COP, the UAE and the International Renewable Energy Agency (IRENA) already announced the launch of the Transition Accelerator Financing (ETAF) Platform, a new global climate finance facility to accelerate the transition to renewable energy in developing countries, on the sidelines of COP26, in Glasgow, the United Kingdom. The UAE further committed $400 million in funding provided by the Abu Dhabi Fund for Development (ADFD) toward the platform’s goal of securing a minimum of $1 billion in total funding. The US and the UAE also announced the Agriculture Innovation Mission for Climate (AIM for Climate) with more than $4 billion of increased investment sourced from 33 countries for climate-smart agriculture solutions.

Mr. Ahmed Samir Elbermbali of the Clean Energy Business Council provided a presentation of the Clean Energy Market in MENA in terms of Finance, Mobility, Hydrogen, and Energy Efficiency, highlighting that only 7% of power in the region today comes from renewable energy. He mentioned that the main barriers to scaling up finance included:

To improve the clean energy market in the region, Mr. Ahmed suggested the elimination of subsidies of fossil fuels, a better and more widespread use of clean energy & clean technology, the introduction of E-transport systems, the adoption of a Zero Net Emissions Policy, and unified regional standards to remove barriers to trade and investment. Other Adoption innovations could include improved energy storage, the implementation of  Blockchain (for power/ grid chain), and the use of artificial intelligence to increase efficiency.

Dr. Cinzia Bianco highlighted the visible changes occurring at the GCC level including net zero trends and green initiatives but tied those developments to external perspective such as cooperation with the European Union. She mentioned that the EU’s focus on climate protection and energy transition and the ‘EU Green Deal’ provide a goof foundation for expanding collaboration with the GCC states. One area of potential better ties is the issue of decarbonization in sectors such as transport for instance. The GCC states need to be aware that in the lead-up to COP 28, a number of European countries will push for a significant shift away from fossil fuel to push for climate goals. This, however, also allows for opportunities such as Germany cooperating with Saudi Arabia and the UAE on hydrogen power, as well as joint investment with the goal of exporting green hydrogen to Europe in the future.

In the discussion that followed, numerous issues were raised including the role of youth and civil society engagement and cooperation. In addition, participants highlighted areas in which there existed great potential for further advances in terms of clean energies and clean industries. So far, the youth segment is not part of the wider fabric when it comes to societal engagement although the number of good initiatives for greater involvement has increased. The last two years alone has seen youth moving into positions in various government entities including in leadership positions. It was equally important to encourage greater integration by the private sector and by climate entrepreneurs.

The bottom line was that countries like Saudi Arabia and the UAE needed to be on board given their role as large oil producer. With the GCC also an important link to the Mediterranean region, the GCC can trigger a lot of development and cooperation.