The US-China Battle for Influence in Global Multilateral Organizations: What the Recent WHO Clash Means for the Upcoming G20 Summit and the Future of Multilateralism 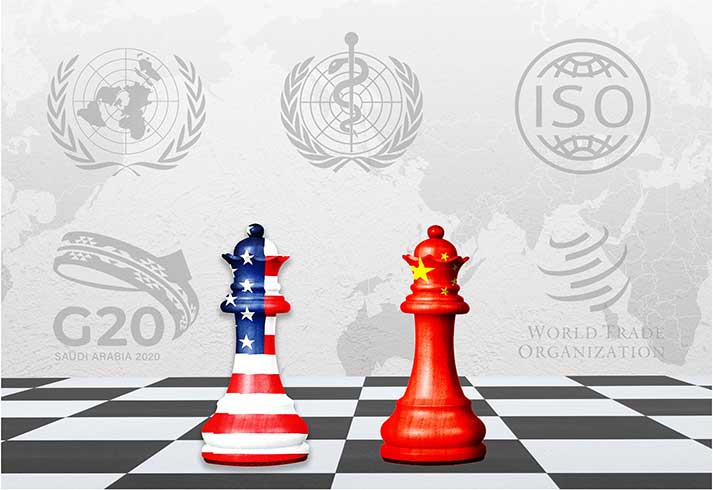 As one of its primary responsibilities upon assuming the Group of 20 (G20) presidency in December 2019, Saudi Arabia announced its 2020 G20 agenda. Setting the agenda remains an important role of the G20 presidency, in addition to organizing year-round G20 working group meetings that take place at the ministerial level, and which culminate in the annual summit where the world leaders of the twenty largest economies issue a collective communiqué on shared priorities and plans of action for international economic and financial stability. However at the time that the 2020 agenda was drafted back in December 2019, the G20 Saudi Secretariat could not have predicted that only a short while later, an unanticipated agenda would impose itself not only upon the G20 member countries but the rest of the world, and that the year 2020 would be characterized by a single phenomenon that would wreak havoc on public health and social systems globally while causing unprecedented disruptions to the economy, travel and international supply chains. Indeed, supporting a global response to COVID-19 and mitigating its negative economic impacts quickly became a priority for the Saudi G20 presidency, and two weeks after the World Health Organization officially declared the virus a pandemic, on March 26th Saudi Arabia organized a virtual G20 Extraordinary Leaders' Summit where the G20 heads of state affirmed their support for the WHO and declared that they would “further strengthen the WHO’s mandate in coordinating the international fight against the pandemic.”

The G20’s two largest economies, the US and China, have arguably received more media backlash against their respective coronavirus response measures than any other countries globally, albeit criticized for different reasons. Nevertheless, each is determined to avoid coming in last place in the public image competition that overshadows their management of the pandemic. China on the one hand represents the origin of the virus, and various international media outlets have accused it of being responsible for the virus’ early spread by silencing whistleblowers such as the now famous Chinese doctor Li Wenliang, who later died of the virus. The US on the other hand currently holds the title of having the highest number of COVID-19 cases and deaths globally, numbers that are widely blamed on US President Donald Trump’s slow reaction to the pandemic and hesitance to implement strict response measures even after it was clear that COVID-19 had spread beyond China. The US began to emerge as the global epicenter of the virus at the end of March, which was when China had conversely begun to reverse its image from virus villain to virus hero by sending COVID-19 aid to various European countries after having driven domestic transmission to nearly zero in a relatively short period of time. Also at that same time, the WHO’s Director-General Dr. Tedros Adhanom Ghebreyesus contradicted President Trump’s March 21st tweet that championed the potential coronavirus treatment hydroxychloroquine & azithromycin, stating two days later at a WHO press briefing that “Using untested medicines without the right evidence could raise false hope and even do more harm than good."

The US begins its efforts to overhaul the WHO

Up until that period, Trump had largely praised China for its pandemic response. However in the context of the US landing under the international spotlight as the new virus epicenter, coupled with Trump’s likely interpretation of Dr. Tedros’ remarks on “untested medicines” as direct criticism, Trump announced on April 14th that he would halt US funding for the WHO. In doing so, he accused the organization, and specifically Dr. Tedros, of overly praising China’s COVID-19 response while simultaneously being too critical of the US’. Following Trump’s accusations against the WHO, China’s foreign ministry stood by the organization, also rejecting US criticism of its own response to the pandemic. Ultimately however, an independent investigation will have to determine whether the WHO correctly followed protocol, and whether or not the WHO enabled China in any way to downplay the virus during the early stages of the pandemic, either intentionally or through negligence. More than 110 countries have already demanded such an investigation.

Moreover, Trump has gone beyond stopping US funds to the WHO and beginning the formal withdrawal process; over the last months, he has tried to completely overhaul the organization by leveraging the current US presidency of the G7. His efforts will likely increase in the coming months leading up to the G7 and G20 summits, in addition to the US presidential election, in which the outcome partially depends on how the American public perceives Trump’s coronavirus response. The fact that China is not a G7 member has allowed US accusations of China in that forum to go largely unchecked; nevertheless, Trump has failed at successfully negotiating WHO reform talks among the G7 members  (Canada, France, Germany, Italy, Japan, and the UK), and France and Germany recently quit the WHO reform talks entirely. Unlike the US, other G7 members have maintained that the WHO’s main weakness is not that it is too powerful or over-funded, but that on the contrary, an increase in WHO funding would allow the organization to operate more effectively.  Furthermore, France and Germany indicated that the US should not be permitted to lead the WHO reform talks since it has already begun the process of formally withdrawing from the organization. The US failure to successfully negotiate WHO reform talks among the G7 members is likely only a preview of what will occur at the upcoming Saudi-hosted G20 summit this November. Unlike the G7 however, China is a member of the G20, and therefore the US will have even less leverage over those discussion outcomes. Dominating G20 discussions will prove much more difficult for Trump, who throughout his four-year term has called into question various multilateral institutions after he determines them to be unfavorable to US interests or his own political agenda. Saudi Arabia could therefore find itself under increasing US pressure to set the G20 summit’s agenda in accordance with Trump’s own interests with regard to discussions on the WHO and the coronavirus response narrative, yet Saudi Arabia will want to avoid any perceived slight against China, its largest trade partner.

Organizations that were established to foster international cooperation and prevent conflict are increasingly becoming the source of conflict itself among competing superpowers. As the US-China rivalry continues to escalate, their clashes across the battlegrounds of the world’s most influential international organizations will likely intensify as well, and the fate of entire organizations, such as the WHO, run the risk of becoming collateral damage in the soft power conflict between the two countries. For example, the ease with which President Trump was willing to sacrifice the world’s most important international public health organization in the middle of a global pandemic could set a dangerous precedent for the post-WWII multilateral order. If he, or other politicians for that matter, are able to convince the public that these organizations are not effective when we need them the most, then it becomes easy to call into question their entire legitimacy. While the WHO remains under the spotlight in this regard due to the unending global threat of the COVID-19 pandemic, US-China competition continues to unfold in other organizations as well. For example on August 14th, in the context of its ongoing maximum pressure policies towards Iran, the United States’ proposed extension of the arms embargo against Iran failed in a United Nations Security Council (UNSC) vote, in which China, an ally of Iran, was one of two countries to vote against the US proposal. Following the vote, China’s ambassador to the UN stated that this "once again shows that unilateralism receives no support and bullying will fail." In terms of the World Trade Organization (WTO), domestic bipartisan support for a US withdrawal is already underway following years of criticism that the organization emboldens China, yet such a move would allow other countries to discriminate against US goods while at the same time giving China free reign to influence the rules of the global economy. Furthermore, in the years leading up to China’s establishment of the Asian Infrastructure Investment Bank (AIIB) in 2016, which stands in contrast to the US-dominated World Bank, the US actively lobbied other countries not to join as members of the new organization in fear that it would deliberately undermine other multilateral development banks. Today however, the AIIB has the second largest global membership after the World Bank, including among its members all the GCC countries.

How global multilateral organizations ultimately suffer from the US-China rivalry

As long as international organizations’ most powerful member states are actively undermining multilateral solutions by exploiting their spheres of influence within those organizations to advance a unilateral agenda, the organizations themselves will suffer. In efforts to appear impartial to both China and the US, or potentially face similar consequences as the WHO and lose a significant amount of funding, organizations could become even less efficient in carrying out their mandates due to a fear of making the wrong move and losing support from either the US or China. Of course, as an international forum and not an international organization with a permanent staff or headquarters, the G20 represents a unique platform for this US-China soft power rivalry to play out, especially in the context of increasing tensions between the two countries. Considering that the number one item on the agenda of the upcoming Saudi-hosted G20 summit will likely be global response measures to the pandemic and its economic devastation, a discussion of which would be impossible without also invoking the WHO, one wonders how achieving consensus or meaningful dialogue could possibly take place when the US and China have essentially spent the last five months spouting aggressive rhetoric at each other on these very topics. What is clear however, is that the ongoing US-China fight for global economic influence will continue to shape the future of multilateralism and global governance, for better or for worse.

*Aileen Byrne is a Senior Researcher at the Gulf Research Center