The Crisis of Ukraine in the Gulf: Security, Economic, and Energy Repercussions 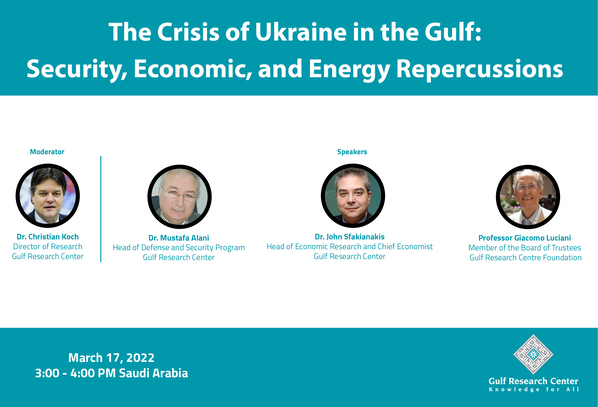 The war in Ukraine has been going on for almost three weeks, and its effects have been felt worldwide. For the Middle East and the Gulf, the conflict comes at a time when the region itself remains in a precarious position. On the one hand, the region continues to be embroiled in numerous ongoing conflicts within countries such as Syria, Iraq, and Yemen. On the other hand, geopolitical, economic, and energy issues play a key and significant role in evaluating the repercussions of the Ukraine crisis for the Gulf region. As such, on March 17, 2022, the Gulf Research Center (GRC) held a webinar regarding the geopolitical, economic, and energy repercussions of the Ukraine crisis for the Gulf region. Dr. Christian Koch, the Director of Research at the GRC, moderated the webinar.

On the geopolitical front, Dr. Mustafa Alani, the Head of the Defense and Security Program at the GRC, explained that the Ukraine crisis does not constitute an immediate and strategic threat in the region, and that the GCC will continue to take a neutral stance. On the one hand, they will continue to grow their relations with Russia, as they have done in the past five years. However, on the other hand, they will refrain from taking an opposing stance against the U.S. and the West. Dr. Alani highlighted that the question with taking a neutral stance is how long one can maintain such a position. Given that ultimately Russia is not an alternative to the present U.S. security role in the region, one can expect that the GCC states will increasingly side with the U.S. and the West as the war in Ukraine continues.

On the economic front, Dr. John Sfakianakis, the Chief Economist and the Head of Economic Research at the GRC, stated that the GCC states are benefitting at the moment from the crisis as higher oil prices have led to higher state revenue, a higher GDP, and less demand to issue debt. This comes at a time when these countries have also taken measures over the years to reduce expenditure and save income. Saudi Arabia and Qatar, particularly, have lowest capital expenditure and will maintain a very disciplined approach to spending, both inside and outside of the country. However, Dr. Sfakianakis pointed out that the issue lies outside the region, as there is an acute concern about a global recession. In addition, the region is getting less affluent in terms of purchasing power parity. In conclusion, there is a positive short-term development because of the high oil prices, but this needs to be balanced against various uncertain factors in the medium term.

Professor Giacomo Luciani, a Member of the Board of Trustees at the GRC Foundation, maintained that the Ukraine crisis is mainly political, and only partially an energy crisis. He argued that the energy crisis in fact developed before the Ukraine crisis as over the past few years, there has been insufficient investment into oil and gas production. With the decision now to not only drastically reduce the dependence of Europe on Russian oil and gas, but also to undo the process of economic interrelationship, the repercussions could be significant. Professor Luciani explained that cutting dependence on Russian gas can only come at a high cost because at the present moment as it is challenging to find proper alternatives. Nevertheless, alternatives are coming up, such as new LNG projects in the United States and Qatar.

The recording of webinar can be found here