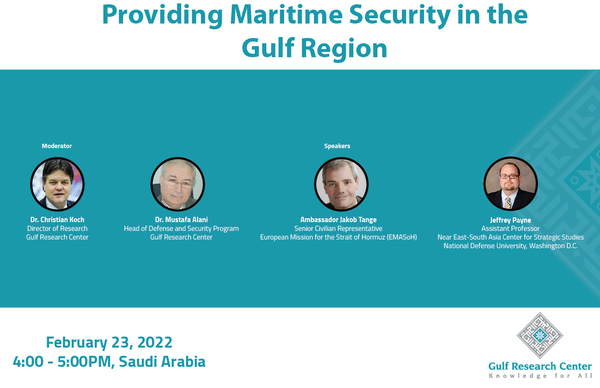 The Gulf Research Center (GRC) held a webinar focused on the fragile security environment in the Arabian Gulf, Gulf of Oman, Gulf of Aden, and the Southern Red Sea. Dr. Christian Koch, the Director of Research at the GRC, moderated the webinar and explained that the increase in attacks by Houthi rebels in Yemen led to several responses both regionally and internationally. On a regional level, the UAE discussed with Iran maritime border corporation and the flow of shipping traffic. Internationally, there have been deployments of two maritime missions to the region: first, the U.S. created The International Maritime Security Construct (IMSC), and its operational arm, Coalition Task Force (CTF) SENTINEL, to protect commercial ships in the gulf, with the support of Bahrain, the base of the U.S. Fifth Fleet, Saudi Arabia, the UAE, Australia, and the U.K.; and second, the European-led Maritime Awareness in the Strait of Hormuz (EMASOH) and its military arm AGENOR, operating out of a French naval base in Abu Dhabi that similarly aims to ensure freedom of navigation.

Dr. Mustafa Alani, the Head of the Defense and Security Program at the GRC, explained that there are four forms of threats in the region to maritime security: state threats (for example, Iran and Israel), attacks by state-sponsored militia (e.g. Houthis), terrorist activities (such as those carried out by Al-Qaeda), and organized criminal activities (Piracy). In order to deal with these threats, there is however both a lack of capacity within the region and a lack of sufficient responses from the international community to the current maritime situation.

Ambassador Jakob Tange, the Senior Civilian Representative in the European Mission for the Strait of Hormuz (EMASOH), explained that EMASOH aims to assure freedom of navigation by maintaining an autonomous situation appreciation, contribute to a stabilized environment, and promote the European perspective and presence at sea. EMASOH has nine members: France, Greece, Portugal, Belgium, Germany, the Netherlands, Italy, Denmark, and Norway. Ambassador Tange explained that EMASOH has two tracks: a diplomatic track headed by Denmark that aims to de-escalating tensions in the region through dialogues, as well as a military track headquartered in Abu Dhabi on the French naval base. EMASOH’s principle is of neutrality, dialogue, and de-escalation, by a light footprint approach: observe and monitor but do not engage. Ambassador Tange concluded by stating that there is still an issue with decreasing tensions with Iran, but the JCPOA might carry a constructive momentum.

Jeffrey Payne, an Assistant Professor at Near East-South Asia Center for Strategic Studies at the National Defense University, stated that the main structural problem is that for a region that is comprehensively reliant on maritime trade for its economic well-being, there is a pervasiveness of sea blindness throughout the Middle East and the Arabian Peninsula. He stated that the scale of the challenges in the water is immense; and it is often hidden and asymmetric in operation. He explained that navies, the U.S. Navy, in particular, will need to expand their operational comfort zones, such as drug interdiction, arms interdiction, and human trafficking. He concluded by stating that coast guards and other law enforcement and maritime constabularies will be critical leaders because they are inherently built to address some of these asymmetric operations since their orientation is towards the non-state actors.

The recording of webinar can be found here