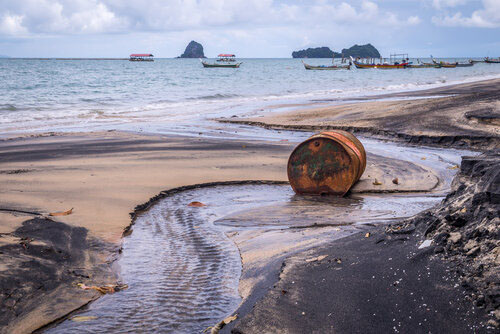 The 45-year-old Safer Floating Tank, which is a neglected floating oil storage vessel loaded with approximately 1.1 million barrels of crude oil is anchored about 60km north of the rebel-held port of Al-Hudaydah in Yemen.

Safer was built in 1976 and was moored about 7 km. (4.3 mi.) off the coast of Yemen in 1988 under the ownership of the Yemeni government via the Yemen Oil and Gas Corporation (YOGC), which used it to store and export oil from inland oil fields around Ma’rib. In its storage configuration, Safer has a capacity of about 3 million barrels of oil. The ship is estimated to contain about 1.14 million barrels of oil. Things are on hold regarding the controlled Safer ship and its oil load by Houthi rebels as both Yemeni government and Houthi rebels claim the right to sell its oil cargo and use revenues to their benefit. No inspection team by UN is allowed to board and check the condition of the vessel and thus no action can be taken by any party to ensure the safety of the ship.

Many environmental and economic experts have warned of an environmental, economic and humanitarian disaster for Yemen and its neighbors if the vessel breaks apart or explodes, especially considering that the tanker has had almost no maintenance since the start of Yemen's devastating civil war five years ago.

In late May 2020, sea water flooded the tanker's engine room, increasing the risk that the vessel could sink or explode. A temporary fix was found by locals, but the United Nations warned that it could have led to disaster causing devastation to marine life in the Red Sea as well as the destruction of livelihoods of those who depend on the Red Sea for fishing. It is estimated that approximately 28 million people rely on the Red Sea and its coastal zone for their livelihoods.

The Red Sea is among the world’s most important repositories of biodiversity, supporting many important species including marine mammals, sea turtles and seabirds. In addition, the conditions and ecosystem of the Red Sea is sutiable for coral reefs to flourish, while the shallow shelves bordering the sea ensure sufficient light for calcification to occur and for easy photosynthesis in algae.

However, the Red Sea is almost a closed sea and therefore its ecology would need over 30 years to recover from the ensuing devastation of Safer oil spillage.

A potential spillage could also disrupt one of the world's busiest shipping lanes and affect deliveries of aid supplies to Al-Hudaydah, which is the principal lifeline for just under two-thirds of Yemen's population.

There is no doubt that the current state of the FSO Safer poses numerous environmental risks and potentially destructive impacts. The Yemeni environmental group Holm Akhdar (Green Dream) estimates the main environmental negative impacts to be as follows:

The precise environmental cost of such an oil spill into the sea is hard to calculate, but according to the UK-based Riskaware, an oil spill could take two-and-a-half years to clean up, at a cost of $20 billion. Even more serious would be a fire or explosion on-board the vessel, which could lead to 40 per cent of Yemen’s agricultural land being covered in soot, leaving more than 3 million farmers unable to work for a year.

In the case of a closure of the nearby key port of Al-Hudaydah, and in the event that an oil spill were to occur or a tanker to explode, within 5-6  months a 200 per cent increase in fuel prices would be triggered, while food prices – in a country that is almost entirely reliant on imports – would likely double.

While the west coast of Yemen would be the hardest hit, the impact would quickly extend to Djibouti, Eritrea and Saudi Arabia, subsequently affecting demand for seafood from the Red Sea and impacting more than 200,000 ships that pass through it every year. In the case of a spill, it would nonetheless take years to restore ecosystems and economic recovery.

It is important to also consider parallels to the environmental disaster currently facing Mauritius as of August 7th, when Mauritius declared a state of environmental emergency after the Japanese-owned cargo ship MV Wakashio ran aground on a coral reef, leaking 1,000 tons of oil onto its pristine coasts.

This has led to numerous dead dolphins, destroyed reefs, blackened beaches and sticky waters, in addition to a suffering tourism industry. Furthermore, the catastrophe sparked demonstrations demanding that the government resigns. This is evidence of how such an environmental disaster can lead to an economic and political crisis in addition to the overwhelming environmental damage.

The question now is whether the world will react in time in order to alleviate such a potential catastrophe off the coast of Yemen. In this regard, the best, fastest and safest solution is to offload the oil from the ship followed by transporting it to a safe location for dismantling.

Nevertheless, at this moment, a number of urgent actions need to be taken by concerned parties, the United Nations and the Arab League as follows:

- The UN and Arab League must develop a response plan in the event that an oil spill were to occur, considering that the Safer could release four times more oil than the notorious Exxon Valdez disaster did off the coast of Alaska in 1989, and taking into account that neither war-torn Yemen nor its neighbors have the capacity to manage and mitigate the consequences of such a huge spill.

- Without delay, the Arab League and UN should immediately work to remove any obstacles, especially political ones, to further the efforts needed to eliminate the dangers posed by the Safer tanker.

- With UN assistance, Yemen should assess the conditions of the ship and take the necessary measures to secure it and prevent its oil from leaking out.

Preventing this calamity should not be politicized, as preventing potential environmental disasters like Safer has the potential to unite all fighting parties and persuade them to sit together and cooperate to prevent environmental pollution, resource destruction, health hazards and economic losses. After all, in case of such an environmental disaster, everyone will lose and there will be no winners at all.

The Yemeni people are already facing many severe challenges and difficult conditions including war, disease, hunger, a collapsed economy and an uncertain political future. The prevention of a Safer disaster is possible, if concrete measures are taken quickly. Perhaps this potential catastrophe can urge all Yemenis, the Arab league and the UN to push for the utmost goal, which is the necessity to sit together put in the work to stop the war in Yemen and lift the siege on the Yemeni people.

Last but not least, of the recent Beirut Port explosions serve as another example of the risks posed by Safer, in terms of the need to take great precautions in the transportation and storage of dangerous goods and similar materials. The Arab League and the UN have a huge responsibility to move quickly and take action to eliminate these risks and save lives. Neither the region nor the world can bear the catastrophic impacts of this environmental bomb off Yemen’s coast.