Education in the GCC: Developments and Trends 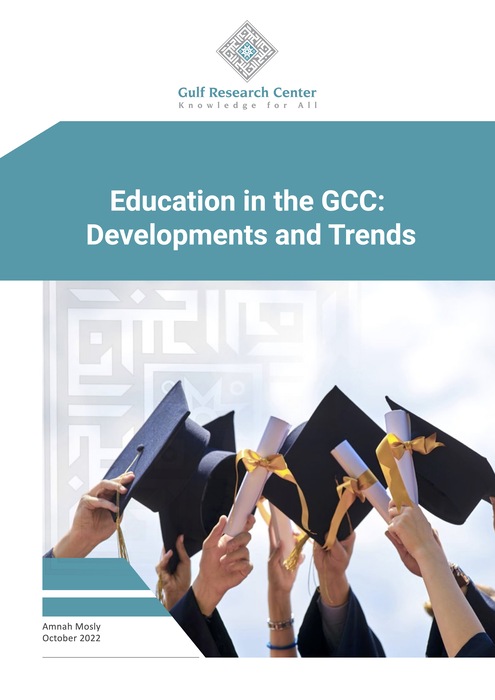 From early on in its inception, the GCC has launched meetings and committees to represent joint educational cooperation regarding education. From the 7th session of the Supreme Council in Muscat in December 1985 to the 24th session in Kuwait in December 2003, the GCC countries focused on formulating a comprehensive developmental plan through deliberations and resolutions.

Specifically, in Kuwait in November 1993, the higher education institutes, the Committee of the Directors and Presidents of Universities, and the Higher Education Institutions adopted a joint action plan. The plan addressed areas of mutual interest and objectives of cooperation, leading to the creation of committees, including deans of colleges of arts, science, and medicine, deanships of admission and registration, libraries, students, vice-presidents of universities, and heads of certain scientific departments. By 1996, Ministries of Higher Education were established in most GCC countries, and consequently, a Ministerial Committee for Higher Education was established to supervise the areas of cooperation regarding education. At the same time, each of the six countries established their own mandates based on respective educational objectives and goals.

It is important to note that the role of the GCC is to establish coordination, integration, and interconnection among the six countries to achieve unity in the region, as stated in the GCC Charter. In addition, the GCC Charter states that other basic objectives of the Council include deepening and strengthening relations, links, and areas of cooperation prevailing between their peoples in various fields, formulating similar regulations in various sectors such as education, economy, finance, commerce, trade, customs, culture, tourism, legislation, administration, and health, and stimulating scientific and technological progress in the fields of industry, mining, agriculture, water, and animal resources in order to establish scientific research, joint ventures, and cooperation by the private sector.

Since this initial period, all six GCC countries have experienced significant social and economic changes over the years, such as diversifying their economies, promoting gender equality, and enhancing their education sector. The timeline below, taken from the Regional Center for Educational Planning’s 2021 Future Scenarios for Education in the GCC Countries report, outlines the progression of education in the GCC States.

The timeline shows that, over the years, the GCC states have experienced tremendous growth in the education sector. The launch of Saudi Arabia’s “Madrasati” e-learning platform in response to the COVID-19 pandemic, for example, has been cited as an important achievement regionally and internationally. The “Madrasati” platform was ranked among the best seven global e-learning platforms in a study conducted by the Online Learning Consortium (OLC). The study concluded that the Saudi “Madrasati” platform outperformed 174 countries, proving to be one of the comprehensive responses against the challenges resulting from the pandemic (Unified National Platform of the Kingdom of Saudi Arabia, 2021). Outside of such specific examples, much of the advances in education in the GCC states can be seen at the national level, reflected by the GCC states’ national visions outlined in the next section.

The GCC countries have, over the past decade, announced long-term national visions with defined areas, objectives, targets, and initiatives. Much of the developments in the education sector can be seen at the national level. Given the socioeconomic and political importance of education, all of the GCC states have made education a main pillar in their respective national plans. This paper will now analyze each country’s plan in enhancing its respective education sector.

Education is one of Saudi Arabia’s key sector of focus in its Vision 2030. Moreover, Saudi Arabia is one of the leading countries in investing in the education sector. According to the Ministry of Finance’s Budget Statement, key achievements in 2021 include: increasing the number of university admissions by over 10%, allocating 60 educational facilities in Makkah, launching the Excellence Scholarship Path for 32 additional majors in 70 international universities, expanding the King Khalid University Hospital, and establishing a university center for oncology at the King Saud University (Ministry of Finance, 2022).

Saudi Arabia’s Vision 2030 aims to improve citizens’ and residents’ quality of life under several Vision Realization Programs. The Human Capability Development Program is one of Saudi Vision 2030’s programs and was created to “develop citizens' capabilities, prepare them for the future, and support them to seize opportunities” (Saudi Vision 2030). Significant objectives related to education include improving equal access to education, improving fundamental learning outcomes, improving the ranking of educational institutions, and ensuring the alignment of educational outputs with labor market needs (Saudi Vision 2030). One noteworthy commitment includes having at least 6 Saudi universities ranked within the top 200 universities globally by 2025. According to the Saudi Vision 2030, the Human Capability Development Program consists of three core pillars: developing a resilient and strong educational base for everyone, preparing for the future labor market locally and globally, and providing lifelong learning opportunities (Saudi Vision 2030).

The United Arab Emirates is another leading country regarding education. In 2010, the United Arab Emirates launched the UAE Vision 2021, which has six national priorities, including putting forth a First-Rate Education System and a Competitive Knowledge Economy (UAE Vision 2021). Both the Dubai Plan 2021 and Abu Dhabi Economic Vision 2030 have launched plans to improve the quality of education via improved curriculum and infrastructure (GFH, 2020). In addition, the Ministry of Education launched the National Strategy for Higher Education 2030 in September 2017, which aimed to develop the country’s scientific and professional education standards to serve future generations. Two of the initiatives in the strategies are the Investment in Knowledge initiative and the Competitive Research Funding initiative.

The state of Kuwait has also taken steps to improve its education system. Education has been a cornerstone of Kuwait’s Vision 2035, particularly as a way of social progress, economic diversification, and sustainable growth. Two specific programs are the quality of education program and the higher education program (GFH, 2020). Kuwait established the Kuwait Schools Development Programme (KSDP) that aims to develop nine schools with a capacity for 4350 pupils around Kuwait City, overseen by the Ministry of Education and the state’s public-private partnership (PPP) programme Partnerships Technical Bureau, according to a report by Oxford Business Group.

The vision outlined four aspects of this strategy: (1) develop Bahraini teachers through improved recruitment, training, management, and perception, (2) attract new industries and provide quality training in advanced skills, (3) review the performance of educational and training institutions to set high standards of quality, and (4) enhance research programs in universities to create a knowledge-based economy (The Economic Vision 2030 for Bahrain).

Oman Vision 2040 places a significant emphasis on the education sector. Specifically, Education, Learning, Scientific Research, and National Capabilities are main national priorities listed in the vision. In addition, Oman Vision 2040 lists the following objectives regarding improving the education sector: a high-quality educational system with societal partnership, an integrated and independent system to govern and evaluate the educational ecosystem against national and international standards, value-enforcing curricula that incorporate Islamic principles and Omani identity, a system that empowers human capabilities in the educational sector, and an effective national system that nurtures scientific research, innovation, and creativity to build a knowledge-based economy and society (Oman Vision 2040). Moreover, Oman aims to be among the top 10 performing countries in the education field by 2040.

Educated is a significant pillar in the Qatar National Vision 2030. The vision states that “Qatar aims to build a modern world-class educational system that provides students with a first-rate education, comparable to that offered anywhere in the world” (Qatar National Vision 2030). Some of Qatar’s objectives include improving the educational curricula, providing high-quality educational and training opportunities, and developing educational programs. Qatar launched a state-led non-profit organization, the Qatar Foundation for Education, Science and Community Development, created by His Highness the Father Emir Sheikh Hamad Bin Khalifa Al Thani and Her Highness Sheikha Moza bint Nasser in 1995. Its flagship initiative, Qatar Education City, was inaugurated on October 13, 2003, and hosts branches of campuses from numerous leading educational institutes, such as Georgetown University, Northwestern University, Cornell University, and Texas A&M University, as well as a local university, Hamad bin Khalifa University, as well as research centers (Qatar Foundation, 2022). Since then, Qatar Education City has brought together a total of 10,600 students across 8 universities and 13 schools that are part of its Pre-University Education network. Additionally, Qatar Foundation established the Qatar National Research Fund in 2006 to further establish the country as a knowledge-based economy.

All six GCC states therefore provide excellent opportunities for further development in education. One of the most significant growth drivers is the GCC states’ funding and financial commitments to improving their education sectors. In 2019, the GCC governments allocated an average of 13% of total government expenditure to education budgets (GFH, 2020). Graph 1, recreated below from GFH’s 2020 Sector Report on GCC Education, shows the breakdown of the GCC countries’ education budgets in 2019.

A key growth driver as far as education is concerned is the rising population in the GCC states. As Graph 2 demonstrates below, the population in the GCC has been increasing and is expected to reach 63.5mn in 2023, at a CAGR of 2.3% (GFH, 2020). Consequently, the GCC states have responded by developing their education system based on societal needs, leading to achievements such as an increase in student enrolment and advancing in technology-empowered education, described in the next section.

In addition to a growing economy, the GCC states have experienced an influx of student enrollment due to the increasing number of private universities in recent years. According to Alpen Capital’s GCC Education Industry 2021 report, student enrollment reached around 12.2 million in 2019, a 0.7% CAGR from 2014. The pre-primary segment recorded the highest average growth in enrollment rate at 3.7%, while the tertiary segment increased by 1.9%, and the primary and secondary segment increased by 0.2%, as demonstrated in Graph 3 (Alpen Capital, 2021). In addition, the gross enrollment (GER) increased in the pre-primary and tertiary segments, as shown in Graph 4.

The COVID-19 pandemic undoubtedly set the stage for the rapid switch to eLearning. According to the Regional Center for Educational Planning, the GCC states have a projected growth of over $490 million, or around 10%, between 2020 and 2024 (Regional Center for Educational Planning, 2021). In addition, GFH states that the eLearning market in the GCC is expected to grow at a CAGR of 14.0% during 2018-2022, driven by tremendous government investments and support (GFH, 2020). Amid the pandemic, “personalized learning” has become a more popular and preferred education model. Specifically, GFH explains that Saudi Arabia holds the largest market share of over 35%, followed by the United Arab Emirates with over 21% (GFH, 2020). According to Saudi Vision 2030, over 9 million people benefited from distance learning platforms, and over 300,000 students benefited from the virtual kindergarten platform (Saudi Vision 2030).