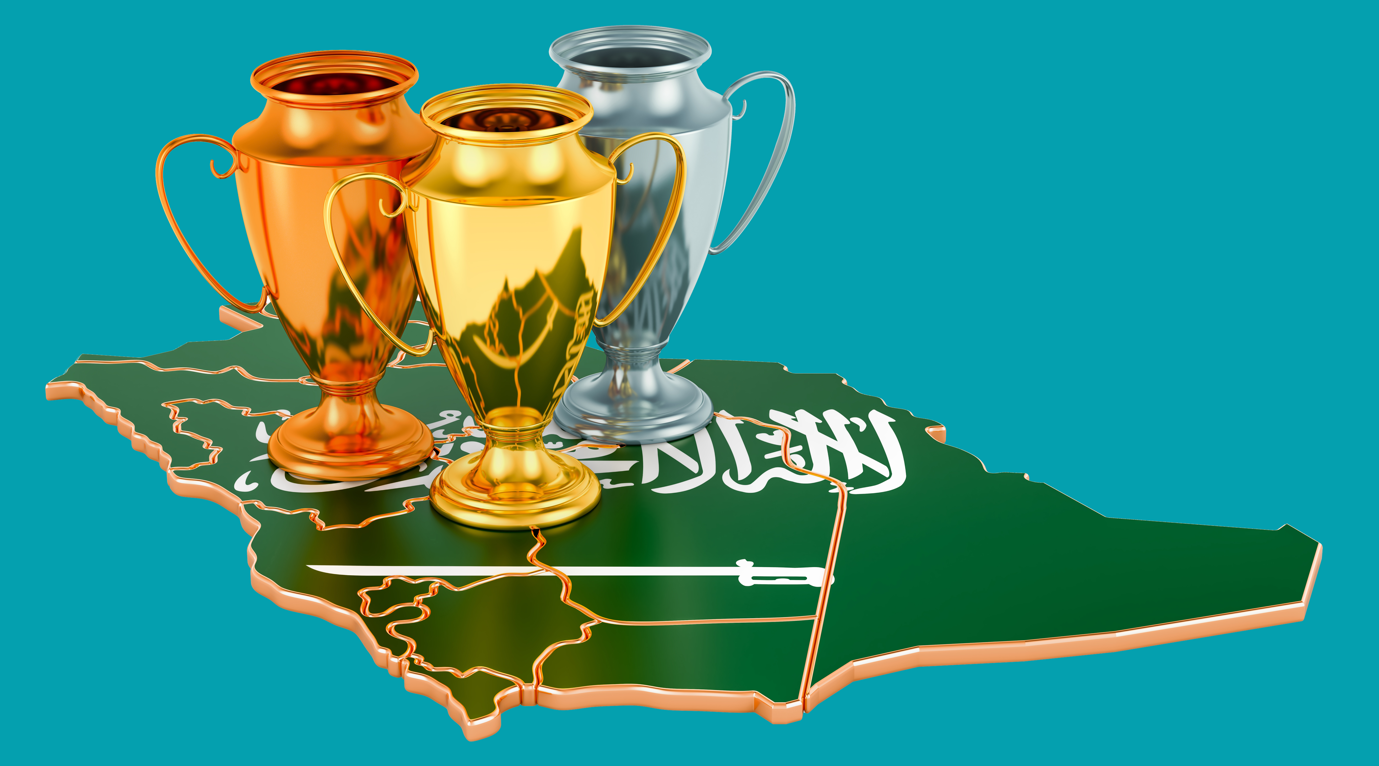 Over the past few years, sports has been at the forefront of politics. Under Saudi Vision 2030, sports is identified as one of the critical pillars of the Quality of Life Program. As a matter of fact, two of the program’s significant objectives are “promoting sports activities in the community” and “achieving excellence in several sports regionally and internationally.” Moreover, it is indubitable that the kingdom is promulgating sports both locally as well as internationally. Saudi Arabia’s national team already won a place in the Special Olympics Unified Cup, which took place in the summer of 2022 in Detroit, Michigan. Saudi Arabia’s Ambassador to the United States, HRH Princess Reema bint Bandar, attended the match and stated on her official Twitter account that she was “thrilled to be able to share their excitement and achievements on this special occasion.”

Developments have not stopped there. Saudi Arabia is currently hosting the first edition of the Saudi Games under the patronage of the Custodian of the Two Holy Mosques, King Salman. The Saudi Games, also dubbed the Saudi Olympics, is taking place in Riyadh from October 27 to November 7, 2022. More than 6,000 Saudi athletes from across the kingdom are competing in over 45 individual and team sports, including 5 games dedicated to Paralympic competitions. The Saudi Games aims to “provide a platform for Saudi athletes to excel to their best potentials,” as well as “inspire Saudi youth through sports and demonstrate the kingdom's capabilities globally in hosting the largest events.” Elaborating on this matter, Lina Almaeena, chairwoman of Jeddah United Sports Company, stated that the Saudi Games strives to “motivate the nation into participating more in various sports in line with Vision 2030, create champions at a national level, and empower national teams which eventually participate at an international level.”

The Saudi Olympics are set to be the largest sporting event hosted in the kingdom, both in terms of participation and prizes with the committee offering more than a total of 200 million riyals in prize money for the various competitions. Saudi Arabia’s Minister of Sports and President of the Saudi Arabian Olympic Committee (SAOC), HRH Prince Abdulaziz bin Turki bin Faisal, stated that the Saudi Games will “positively affect our youth,” also mentioning that “this tournament is one of the most important programs to emerge from Saudi Vision 2030.” He added: “Our primary objective in the Saudi Games is to produce new sporting heroes through the Elite Athletes Program launched less than a year ago. It will discover new talents through the Saudi Games and commit to empowering them to reach podiums in continental and international competitions.”

In parallel to the Saudi Games, NEOM is hosting the NEOM Beach Games 2022 from October 19 to December 9, 2022. This competition will host global athletes from 25 countries in 5 sports: kitesurfing, triathlon, 3x3 basketball, beach soccer, and mountain biking. Nadhmi Al-Nasr, NEOM’s CEO, stated, “we are delighted to host the NEOM Beach Games, which bring together local and international rights holders for five globally popular sports in one diverse location in the Kingdom of Saudi Arabia.” The NEOM Beach Games is another event that is emblematic of the kingdom’s ambition to promote its sports sector on a global stage.

Ahead of the Saudi Games, Saudi Arabia’s Crown Prince HRH Mohammed bin Salman unveiled Saudi Arabia’s National Gaming and EsportsStrategy in September 2022, which plans to invest 142 billion riyals ($38.7 billion) to make the kingdom a global hub for the gaming industry by 2030. The Crown Prince stated that Savvy Games Group, a firm owned by the Public Investment Fund, “is one part of our ambitious strategy aiming to make Saudi Arabia the ultimate global hub for the games and esports sector by 2030.” The strategy complements Vision 2030 by seeking to improve the quality of life by improving players’ experience, providing new entertainment opportunities, contributing to the GDP by approximately 50 billion riyals, and creating around 39,000 new job opportunities by 2030. The announcement was made following the conclusion of the 10-week Gamers8 festival in The Next World Forum.

In the longer term, Saudi Arabia is making preparations to host the 22nd Asian Games in Riyadh in 2034. HRH Prince Abdulaziz bin Turki, the Minister of Sports, has highlighted that “Saudi sport has taken advanced steps globally.” Saudi Arabia will further host the 2025 Asian Indoor and Martial Arts Games as a warm-up to Riyadh 2034, the 2023 World Combat Games, and the 2029 Asian Winter Games in TROJENA, NEOM. This will mark the first time the event, which is scheduled every four years, will be held in west Asia. TROJENA is also set to be the region’s first outdoor ski resort.

In the wake of these fast-paced developments in sports in Saudi Arabia, the International Olympic Committee (IOC) announced that it would renew three memberships for key personnel for the next four years: (1) Minister of Sport and President of the Saudi Olympic and Paralympic Committee (SOPC), HRH Prince Abdulaziz bin Turki Al-Faisal as a member of the Marketing Commission, (2) SOPC Vice President, HRH Prince Fahd bin Jalawi bin Abdul Aziz as vice president of the Commission for Public Affairs and Social Development, and (3) Saudi Arabia’s Ambassador to the United States, HRH Princess Reema bint Bandar, who is also a member of the IOC and board member of SOPC, as a member in the Gender Equality, Diversity and Inclusion Commission and the Coordination Commission for the Brisbane 2032 Olympics as well as in the Sustainability and Legacy Commission.

To be sure, these developments have not been impervious to controversy. One of the main accusations Saudi Arabia faces is the argument that through its development and investment into sports, the kingdom is “sports-washing” its image. When seen through the framework of Vision 2030, however, it is clear that sports much be seen within the context of the kingdom’s economic diversification strategy part of its rapid transformation. Prior to Vision 2030, sports did not hold as prominent a focus as it does now. Yet currently, sports is seen as a primary vehicle through which to provide a variety of services to Saudi citizens and to provide avenues for active participation for its wider population. By motivating the youth into entrepreneurial activity, sports is broadening the overall scope of productive economic engagement.

HRH Prince Abdulaziz bin Turki explained that the criticism is “off the mark,” explaining that the country is witnessing historical changes. He added that “we're progressing, we're moving towards a better society, we're moving towards a better quality of life, a better country, for the future.” Moreover, HRH Prince Faisal bin Bandar explained that “one of the things I think that people misunderstand is that the change that’s happening is that we, as a community, we as a population, are looking for, are behind, and are excited about. While we understand that there is accountability on a global scale, and that should be everywhere, that is everywhere, that’s not something unique to this country or this region … [change is happening] at a pace for this population and this culture.” At the World Economic Forum in 2018, HRH Princess Reema bint Bandar addressed the world’s negative criticism and the media’s double standards by explaining that “there is a determination not to allow us to create a new narrative… You ask us to change, and then when we exhibit change, you come to us with cynicism,” which is “destructive” and “detrimental” on a daily basis. Rather, it is vital to understand that the kingdom is working for “evolution, not Westernization.”

Another point of contention is whether Saudi Arabia’s investment in sports is worth it in terms of return. In this regard, a common topic is LIV Golf. Overall, sports is a lucrative business worldwide, and, therefore, an essential and valid aspect of any diversification strategy. There is a growing realization in the kingdom that the end of the oil age is coming and that surplus money available now should be invested in sectors of the future, such as sports. Large-scale sporting events are viewed as having a significant economic impact on the local business environment. Therefore, the Saudi Arabian General Investment Authority (SAGIA) aims to project the country as a major investment destination. In consonance with this mission, SAGIA has been committed to supporting Saudi International, presented by SoftBank Investment Advisors as an exclusive partner. Chiara Noja, Europe’s youngest golfer to win a professional tour event and Golf Saudi’s latest global ambassador, pointed out that the kingdom is promoting active participation both within the kingdom and globally. Noja asserted her delight that the kingdom “not only works alongside so many female superstars from women’s golf but also supports such an ambitious organization as Golf Saud,” adding that “Golf Saudi is doing amazing things for the game whether it’s through their mass participation programs to drive youth engagement and their efforts to draw more people to our sport, particularly young girls and women.” Thus, investing in sports and hosting international events simply makes a lot of sense from a business standpoint.

The announcement that NEOM won its bid to host the Asian Winter Games in the mountains of TROJENA in 2029 has equally raised questions about whether the event will be compatible with global climate requirements. Yet, HRH Crown Prince Mohammed bin Salman, who is also the chair of NEOM’s board, stated that TROJENA will “redefine mountain tourism for the world by creating a place based on the principles of ecotourism, highlighting our efforts to preserve nature and enhance the community’s quality of life, which is aligned with the goals of the Kingdom’s Vision 2030. It also confirms our commitment to being part of the global effort to protect the environment.”

On a broader scale, NEOM has taken drastic measures in transforming the future of water and building a sustainable environment through recycling 100% of wastewater, a net-zero footprint, renewable energy, and seawater mining. NEOM has implemented a fully integrated resource recovery seawater treatment (FIRRST) in order to conserve the Red Sea ecosystem with sustainable carbon-neutral technologies, as part of its efforts to be the leader in renewable-energy-powered desalination and integrated resource recovery seawater treatment. Moreover, NEOM launched its subsidiary company ENOWA to accelerate sustainable living. Peter Terium, the CEO of ENOWA, explained that the company will work synergistically and harmoniously with the environment and nature to create a sustainable cycle. NEOM has also announced the NEOM Green Hydrogen Company (NGHC), a joint venture between NEOM and ACWA Power and Air Products that aims at developing a green-hydrogen-based ammonia production facility powered by renewable energy. Nadhmi Al-Nasr, the CEO of NEOM, elaborated that NEOM is not only looking to benefit the kingdom but also seeks to “become the benchmark for integrated sustainable energy, water, and hydrogen systems and extend its approach to other industries to grow the sustainability marketplace both in the region and abroad.”

Saudi Arabia’s focus on sports and entertainment as part of its overall modernization, diversification, and soft-power strategy is bound to stay. Of the 13 Arab countries, Saudi Arabia came in 2nd in the 2022 Brand Finance Global Soft Power Index with an overall index score of 47.1 out of 100 and, a 2.9-point increase since 2021. The United States leads the index with a score of 70.7. Andrew Campbell, the managing director of Brand Finance Middle East, stated that “Saudi Arabia’s commitment to its Vision 2030 is a clear step in the nation’s journey toward diversifying its economy and showcasing its openness on the global stage, all while building on the nation’s top strengths and capabilities.” The kingdom is thus making significant strides to improve the quality of life across the country, with an emphasis on sports as of the key priority areas.