President Xi Jinping’s Visit to the Kingdom: What does this Entail Moving Forward? 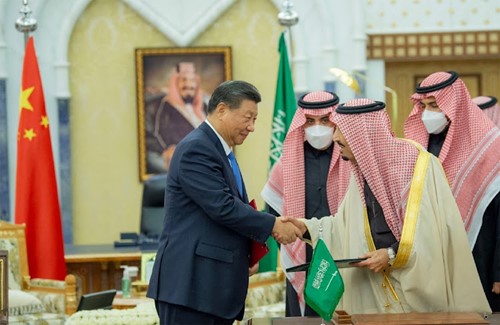 President Xi Jinping just concluded his first visit to the Kingdom of Saudi Arabia in six years, at the China-Arab Summit in Riyadh. As part of efforts to boost China's relations with the Gulf region, President Xi met with King Salman bin Abdulaziz Al-Saud and Crown Prince Mohammed bin Salman and attended two summits with Arab and Gulf leaders. The visit followed an invitation from Saudi Arabia's King Salman "to bolster historic ties and strategic partnership between the two countries," according to the Saudi Press Agency (SPA).

The visit took place within a shifting international environment marked by the crisis in Ukraine, concerns over energy security, the lingering effects of the COVID-19 pandemic, and fears of widespread economic recession impacting the world economy. As such, the main focus of the summit meetings was to see how existing economic and technological relations could be further capitalized on, as these relations have witnessed tremendous growth over the past years.

For Saudi Arabia and the Gulf region, continued economic diversification plans take an absolute precedence in their policy planning and China, as well as much of the rest of Asia, is seen as a key component in terms of existing vision plans coming to fruition. In this context, the determination to expand business and economic ties will not be sidelined by potential political complications, for example, relations with the U.S. In spite of current U.S. suggestions that broadening GCC-China ties could come with consequences for the U.S.-Saudi or U.S.-GCC relationship, GCC countries will move forward with enhancing their relations with China.

Upon his arrival, President Xi expressed his optimism, stating that already "practical cooperation between the two countries yielded fruitful results in [various] fields.” President Xi emphasized that China and Saudi Arabia continue to “closely coordinate and communicate” regarding regional and international affairs. In addition to a “comprehensive strategic partnership agreement” that President Xi and King Salman signed on December 8, a total of 34 investment agreements were signed in areas such as green hydrogen, solar energy, information, cloud services, transportations, logistics, medical industries, housing, and construction.

The agreed partnership welcomed more Chinese companies to take an active part in the industrialization process of Saudi Arabia, including the construction of major infrastructure and energy projects, and enhance cooperation in such areas such as the automobile industry, science and technology, chemical industry, and mining.

Specific agreements signed by officials during the visit included an “alignment plan” between China’s Belt and Road Initiative and Saudi Arabia’s Vision 2030, an agreement with China’s Huwaei on cloud computing and high-speed internet complexes in Saudi Arabia, as well as the building of an aluminum plant signed between the Saudi Investment Ministry and Shandong Innovation Group.

During his talks with Crown Prince Mohammed bin Salman on Thursday, President Xi stated that Beijing agreed to add Saudi Arabia to its list of group travel destinations and increase cultural and people-to-people interactions. On the political front, there was an agreement that the respective heads of state would meet every two years. Moreover, the Kingdom stated its appreciation to China for supporting Saudi Arabia to become a dialogue partner of the Shanghai Cooperation Organization as well as to enhance communication and coordination with China on multilateral occasions, such as the G20 and BRICS.

On foreign policy and security issues, the summit meeting did not cover a lot of ground. In terms of security concerns over Iran, both countries agreed on the need to “strengthen joint cooperation to ensure the peaceful nature of Iran’s nuclear program” and for Tehran to respect “principles of good-neighborliness.” Interestingly, Iranian officials immediately criticized China for issuing such “unfriendly” statements, in particular, the joint statement from the China-GCC summit in which the leaders "affirmed their support for all peaceful efforts" of the United Arab Emirates to reach a solution with Iran on the subject of the three islands of Greater Tunb, Lesser Tunb, and Abu Musa.

No agreements were signed in terms of possible military sales despite the fact that for Saudi Arabia and the GCC states, China is seen as a market from where some military equipment is accessible. This is due in large part to political considerations GCC states have that are tied to their Western arms suppliers. Nevertheless, as the regional arms market becomes increasingly dynamic, there are ample opportunities for China to grow its defense role there.

The lack of focus on larger strategic issues underlined the existing limitations in the Gulf’s ties to China. There is a clear awareness among the GCC states that China is neither capable nor willing to replace the US security role in the region. In fact, in a document released by China’s Foreign Ministry on “Sino-Arab Cooperation in a New Era” just ahead of the summit meetings, there is no mention of China being interested in filling any potential vacuum left by the United States. Instead, the main focus continues to be placed on such themes such as stability, predictability and balance.

The bottom line is that while trade relations for the GCC states point eastward, key security and investment ties remain with the West. Given its own many domestic issues that require attention, China has at this stage no interest in any confrontation with the US with an emphasis on avoiding conflict that could threaten its own national security. An example of this can be seen during the G20 summit where President Xi distanced himself from Russia and its war in Ukraine,advocating a peaceful resolution to the conflict.

The GCC's Asian-centric orientation is nevertheless apparent. A certain pivot towards Asia is to be expected and the development of ties will continue. Whether relations become more strategic, however, will depend specifically on how the US-Saudi relationship develops in the near term. If managed properly, the GCC’s eastward focus will remain limited mostly to economic and business ties. President Xi's visit to Riyadh and attending the summit with regional Arab leaders this week did not change this equation.