Energy Outlook in Japan and Implications for Saudi Arabia 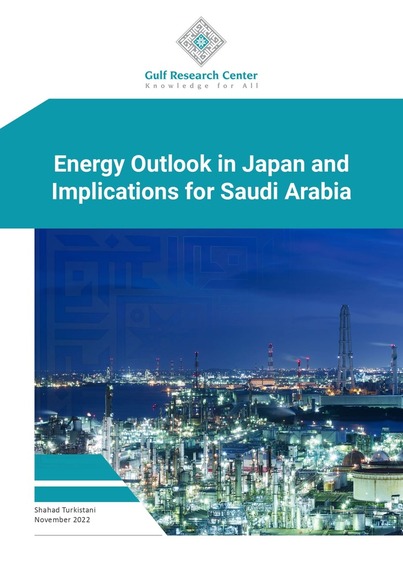 Saudi Arabia and Japan enjoy a strong relationship and have supported each other through many tumultuous developments since they established diplomatic relations in 1955. The first section of this paper touches on the current status of Saudi-Japan diplomatic, economic, and energy relations. The second section describes and analyzes Japan’s changing energy policy (renewable, fossil fuel, and nuclear) in the wake of the Fukushima nuclear disaster and, more recently, the Ukraine War. The paper also assesses the impact of each incident on Saudi Arabia, Japan’s biggest oil importer. Lastly, it concludes with future perspectives and policy recommendations.

Diplomatic relations between Saudi Arabia and Japan were established in 1955. Saudi Arabia was the first country in the Gulf Cooperation Council (GCC) to formalize ties with Japan, realizing its potential future importance. At the diplomatic level, both countries have consistently engaged in reciprocal visits, aiming to develop closer and more strategic ties. Even before 1955, Saudi officials made numerous visits to Japan, which constituted development of the relationship. Most important was the visit of the then Saudi Ambassador to the United Kingdom, Hafiz Wahba, to Japan in 1938, whom the late King Abdulaziz ordered to attend the grand opening of the Tokyo Mosque. A year later, the Japanese government’s envoy to Egypt visited Riyadh and met with King Abdulaziz. Both governments have since continued visits at all levels and at regular intervals. Table 1 shows the visits between the two countries from 1938 to 2020.

Economically speaking, Japan is one of Saudi Arabia’s most important partners. As of 2021, Japan’s imports from Saudi Arabia amounted to $27.51 billion, while its exports were $4.45 billion. About 70% of exports from Japan to Saudi Arabia are transportation equipment, mainly automobiles, while crude oil accounts for most of Japan's major import items from the Kingdom.

Recent decades have witnessed an increase in trade volume between the two countries, both in oil and non-oil products. The economic relationship between the two countries was reaffirmed with the establishment of the Saudi-Japan Vision 2030 Initiative in 2017, which opened the door for renewed cooperation and mutuality between Japan and Saudi Arabia. The Saudi-Japan Vision 2030 initiative aims to facilitate public and private sector involvement between the two sides by aligning and reporting on strategic initiatives that contribute to the objectives of each country's national growth and development strategies. This step has broadened the scope of cooperation to include a wide range of fields that were not considered in the past, such as renewable energy, climate change, infrastructure, entertainment, maritime security, and international cooperation. A key example of this is Japan’s eagerness to invest in Saudi Arabia’s proposed 2030 giga-projects.  Companies like Japanese conglomerate, Softbank, announced that it plans to invest as much as $25 billion in Vision 2030 projects in the Kingdom.  In 2021, SoftBank made its first investment of $125 million in Saudi based customer communication platform, Unifonic. The Unifonic deal is funded through SoftBank’s Vision Fund 2, and the company plans to start a listing on a global exchange within the next three years. This points towards a steady and continued increase in trade relations in various sectors between the two countries.

Regarding energy cooperation, Saudi Arabia has long been Japan's primary energy source. As of July 2022, Japan imported an annual total of 27.39 million barrels, of which Saudi Arabia provided the largest percentage at 40%.  Table 2 shows Japan’s 2021 oil imports from the GCC, with Saudi Arabia accounting for 39.1% of oil imports. Table 3 shows Japan’s Middle East oil imports from 1965 to 2015, highlighting that Saudi Arabia has maintained its position as the biggest importer over that period, while at the same time underscoring Japan’s continued dependence on Saudi oil. Additionally, the two countries recently renewed a joint crude oil storage scheme in Okinawa, providing quick and easy access to other critical customers of Saudi Arabia across the Far East. Tokyo has been paying for storing Saudi Arabian oil at leased storage tanks in Okinawa under the "Joint Crude Storage by Producing Countries" agreement with Saudi Aramco. In return, Japan prioritizes the crude oil stored at Okinawa for commercial purposes, which can reach 8.18 million barrels, in the event of an emergency.