GRCF Director Dr. Christian Koch met with Yukio Tada and Daisuke Yamamoto of the Sojitz Research Institute in the GRC Foundation office in Geneva. They discussed cooperation between the two institutions, participation in the Gulf Research Meeting in August as well as the regional situation in the Gulf Region. 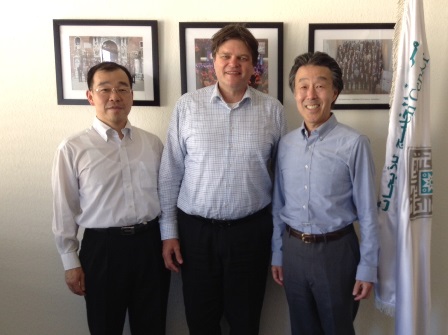 Dr. Christian Koch, Director of International Studies, met today with Sumiko Teranaka and Yuhei Omi of the Japan Institute for Overseas Investment and Ryutaro Nishizaki of the Dubai office of the Japan Bank for International Corporation. They discussed the sanctions policy vis-à-vis Iran and the regional investment climate.

• Geradus Johannes Hoetjes of the University of Exeter, related to the prospects of GCC Monetary Union

• Martin Schneider, a doctoral candidate at the Leizig Graduate School of Management, concerning the development strategies of the GCC states and their outlook

• Dr. Valentina Kostadinova, a researcher at the University of Birmingham, UK on EU's relations with Saudi Arabia and the Arab Gulf.

Dr. Christian Koch, Director of International Studies, met today Mr. Steve Jones and Mr. Jack Stephens of the New Zealand Trade and Enterprise organization during their visit to the UAE. They discussed the economic outlook for the region and the implications of the current political situation. New Zealand is in the process of opening their embassy in Abu Dhabi and expanding their overall presence in the country.

Dr. Mustafa Alani, Dr. Christian Koch and Dr. Oskar Ziemelis met with Michael Sturm, Principal Economist for EU Neighboring Regions at the European Central Bank and Gilles Noblet, Deputy Director General for International and European Relations also at the ECB, during a visit to the GRC. They discussed regional development and its impact on the macroeconomic stability and outlook for the Gulf.

Florian Weisweiler and Christian Koch met with the new Consul General of Switzerland in the UAE, Mr. Walter Deplazes, in the GRC office. In addition to covering regional development and its implications, the guest was informed about the activities of the GRC in particular with reference to the GRC Foundation in Geneva.